Details:
Investigators believe that Fat-lun’s mother strangled him with a plastic tablecloth.

Fat-lun was a student at Tsui Tsin Tong School, a residential care home for children with intellectual disabilities. At age 21, he had just grown too old to stay there.

Details:
Chun Li lived with her father until a woman approached them, saying her 65-year-old father wanted to marry Ms. Li, because of burial customs in Shaanxi Province, where they lived.

Tradition says that a person cannot rest in peace unless they are buried with a spouse. People who die single may be buried with paper dolls; the wealthy can afford to buy the body of an unidentified person in order to bury their relatives with a posthumously-married “spouse.”

The man’s daughter decided against purchasing someone’s bones because that was a crime and decided to approach Chun Li’s father instead.  When Chun Li’s father agreed to marry her to a 65-year-old man, the agreement was that her husband would care for her, and after he died, her daughter-in-law and grandson would care for her. When she died a natural death, she would be buried next to him as his spouse, to allow him to rest in peace. They agreed to pay a bride price, and Chun Li was forced to marry him.

Four years later, Chun Li’s husband had grown worried that if he died first, she might not be buried with him because she was disabled. Allegedly, he decided that Chun Li should die first and set his house on fire, killing Ms. Li. 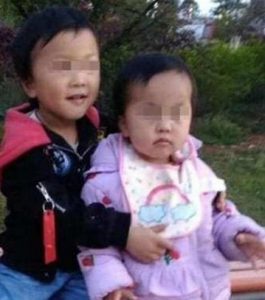 Details:
Miss He’s father was worried about having taken out loans to pay for her medical care, so he decided to buy life insurance and fake his own death. Not telling his wife what he was doing, he drove his car into a river. Three weeks later, thinking him dead, Miss He’s mother took her and her four-year-old brother to the river and drowned herself and both children.

Details:
Xuan’s grandfather was annoyed that he had spent so much trying to treat her cerebral palsy. He and her father allegedly put bricks in her backpack, put the backpack on her, and threw her in the river to drown.

Details:
Lem’s husband killed her by choking her to death. He claimed he had been worried who would care for her if he died.

Case status:
Wong Kok-man (Husband), pleaded guilty to manslaughter, sentenced to 2 years in jail; due to be released after about 1 month with credit for time served.

Source:
‘A tragic case’: Judge frees elderly man who killed disabled wife due to fear no one would care for her if he died
殺癱妻 官輕判八旬翁卑微希望：幫吓我哋就少好多悲劇
【法外開恩】黃國萬悲情殺妻 求情信揭欲輕生 留命為控雙老哀歌

Details:
Soon after being diagnosed with ADHD, Cheng was murdered by his grandmother, who strangled him with the straps of a backpack. She left a note that said she “didn’t want the boy to live a difficult life”.

The little boy was a Primary One student whom neighbors remember as “kind and polite”.

Details:
Ms. Liu’s son decided it was “too tough” to take care of her, so he allegedly stabbed her to death.

Details:
Lam was strangled to death by her husband, who said that he had been worried no one would look after her if he died.

Details:
Li’s mother thought he would have a tough life after she died; so she killed him by drugging him with sleeping pills and then strangling him.

She had other options, but rejected them all. Li could also have gone to stay with his older brother, but his mother didn’t want to burden her other son. And he was eligible for admission to a welfare home, but she preferred to kill him because she did not think they could care for him as well as she did.

Details:
Fung Shuk-ying’s husband strangled her with a belt in a murder-suicide.