Details:
Sandeep’s brother came home and allegedly stabbed him as he lay sleeping in bed. A nurse caring for Sandeep heard the commotion and took Sandeep to the hospital; but his injuries were not survivable. Police say Sandeep’s brother confessed, explaining that he had killed his brother because he could not take care of him.

Details:
Jonathan was shot by his mother in a murder-suicide.

Details:
Ernest’s son allegedly shot him in the chest while visiting him to help him shop for groceries. Police say Ernest’s son, after he was arrested, admitted that this wasn’t the first time he had pointed a gun at his father.

Sources:
Man charged in shooting death of disabled father in South Valley
Man arrested for shooting his own father

Details:
Yat-ming was found dead, his body covered in bruises.

Details:
This man’s son was arrested after having allegedly beaten him to death and injured his wife.

Case Status:
His son has been arrested.

Details:
Joanna’s son allegedly poured gasoline on her and set her on fire. Emergency responders were able to extinguish the fire, but she died at the hospital.

Sources:
Woman dies after being set on fire in Winston-Salem by son, police say

Details:
Patricia was found in critical condition after allegedly being neglected by her children. She died a few days later in the hospital.

Sources:
3 Adult Children Neglected Bedridden Mother So Severely She Had Mold Growing on Her Body: Sheriff
BCSO: Woman severely neglected by her 3 adult children dies in hospital
Mother dies after being found in ‘deplorable’ conditions; 3 arrested

Details:
Driti died after falling from her fourth-floor balcony. After watching CCTV footage, police arrested her mother, who was allegedly upset because she had to care for Driti instead of working.

Details:
This 81-year-old woman was found dead in her bed. Police saw that her intubation tube had been cut open, and arrested her husband on suspicion of having killed her. 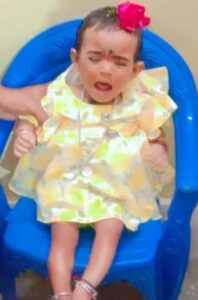 Details:
Tejaswini’s mother claimed that a robber had tried to steal her gold necklace, and that when she refused, the robber had thrown the baby into a water sump. Neighbors rushed the child to the hospital, but she was dead on arrival. Police, who checked CCTV camera footage, say that there was never a robber, and Tejaswini’s mother threw the baby into the sump herself because she was frustrated that Tejaswini’s disability was not being cured, and tired of the financial burden of caring for her. At the police station, Tejaswini’s mother allegedly confessed to killing her.