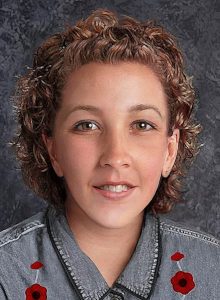 Details:
After the death of her mother, 18-year-old Peggy went to a nearby hospital and asked for help. There, a nurse took her in. But her new caregiver allegedly abused, yelling at her, starving her, and beating her; once she reportedly attacked Peggy with a pitchfork. Peggy was allegedly made to live in a crawl space, and banished there whenever she wasn’t doing chores. After years of abuse, Peggy died from sepsis pneumonia due to her many injuries.

Peggy’s body was found dumped on the side of the road, but she could not be identified for many years. She was known as the “Racine County Jane Doe”, and nearby residents bought her a gravestone. It wasn’t until 2019 that a tipster reported overhearing the nurse talking about having killed someone and called the police, who arrested the nurse and identified Peggy as the victim who had long gone unidentified. When she was finally identified and journalists went to photograph her gravestone, they found that a member of the community had been there and left some flowers, a balloon, and a little wooden sign with Peggy’s real name. It had been a full 20 years since her murder.

Katonya had seizures, which the pastor took to mean that she had the devil in her. Katonya’s family says she starved and beat Katonya and refused to give her her epilepsy medication.

Katonya died, covered in bruises, from untreated epilepsy. Her death was ruled “preventable”.

Source:
Cult leader’s daughter gives an inside look at the House of Prayer
Anna Young gets 30 years in toddler’s death
Death, abuse and questions — life in an Alachua County cult
House of Prayer residents say torture, abuse was common
Survivors ask: Why did cult misdeeds go by ‘wayside’?
Mother Anna: The Cult Leader Suspected of Torture and Murder