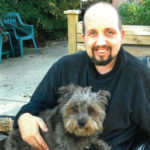 Details:
Shannon lived with his mother, who cared for him. When he fell, she allegedly did not call for help; instead, she dragged him to the bathroom and waited for days. Concerned family members had been unable to reach him or his mother, and finally asked the police to do a welfare check. Shannon was found dead on his bathroom floor, and his mother was arrested. Police say that she said she didn’t want to take him to the hospital even though she knew he probably had broken bones, and wanted him to “die a peaceful death”.