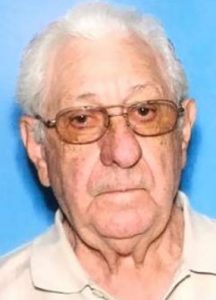 Details:
Tony’s two daughters decided to kill him.  They say that it was because he didn’t want to go to a nursing home.  They fed him sleeping pills and alcohol, but he survived this; so they suffocated him by stuffing a rag down his throat.

Tony was a retired barber who liked to watch Wheel of Fortune and the sunset. He said his prayers every night. His favorite cocktail was vodka and Diet Coke.

Source:
‘Like Arsenic and Old Lace’: Sisters in Their 60s Hid Secret of Dad’s Murder — Until They Slept with Same Man
Florida Man Dated 2 Sisters Who Killed Their Father and He Decided to Turn Them In
Two Sisters Allegedly Killed Their Father And Hid It For Years Before Confessing To A Man They Were Both Sleeping With
FL Sheriff: Sisters killed father, committed “perfect murder,” but were caught 4 years later
Sisters arrested, accused of killing father four years ago in what sheriff calls the ‘perfect murder’
Sisters charged with murdering their father after one confesses to their shared lover
Sisters charged after they ‘euthanized’ elderly father, police say
Pinellas sheriff: Sisters said they ‘euthanized’ elderly father
Two sisters arrested, admitted to killing 85-year-old father in Pinellas County in 2015
Daughters Killed Father After Failed Euthanasia, Busted By Man Both Slept With
Two sisters killed their father. They got caught after sleeping with same man, sheriff says.
Florida sisters arrested for killing cancer-stricken father in 2015
Sisters Accused Of Dad’s Murder Nearly Committed ‘Perfect Crime’
Anthony Joseph TOMASELLI Obituary
Roberts Affidavit | Public Sphere | Common Law