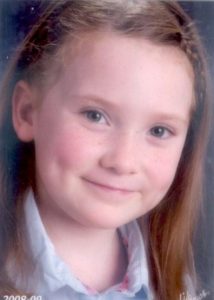 Details:
Camden liked animals, nature, and art.  She enjoyed swimming, hockey, and playing with her friends. She took art and cooking classes and liked to arrange her stuffed animals every night before bed.

When Camden struggled because she didn’t want a bath, her mother restrained her and eventually strangled her with pressure on her chest and hands on her neck and mouth.