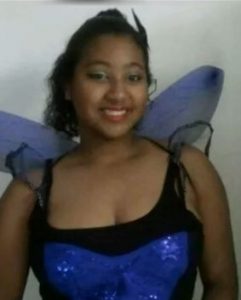 She loved listening to music, watching comedies and eating burgers and fries at Burger King and Mexican pizzas at Taco Bell. Her hair was a big deal. She was always getting it done in braids and she liked to change the color once a month. Her favorite colors were red and blue.
–Sacramento Bee

Charity was studying to become a teacher’s aide.

Charity’s boyfriend, who had a history of violently assaulting her, beat her to death with a curtain rod.

Source:
Fresno man who fatally beat, tortured woman he met online agrees to plea deal
Man confesses to beating girlfriend to death with closet rod, police say
Man takes blame for girlfriend’s death in Fresno
She wanted ‘love and attention.’ Her boyfriend is charged with torturing and killing her