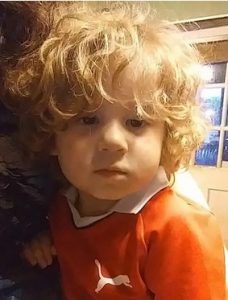 Details:
Dante was a happy baby. He had a developmental delay, and had difficulty chewing and swallowing. He could say a few words, like “ew” and “yeah”. He was being evaluated for autism.

His aunt called him “Monkey Man” because he had a favorite blanket with a monkey on it which he carried everywhere. Before he went to sleep, he rubbed his face against his blanket.

Dante’s mother left him with her friend; shortly thereafter, Dante was brought to the hospital, unresponsive, with bruises, a compressed neck, and a brain injury, and died a few days later. The babysitter was charged with murder.

Source:
‘This poor kid was doomed from the beginning:’ The tragic life and death of Dante Mullinix