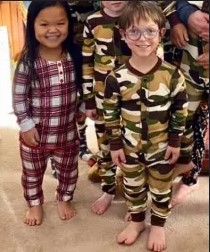 Details:
Felicity, Barrett, and their mother Yvette Siegert-Kreb, were killed by their father, who then killed himself.

Felicity and Barrett were both international adoptees, Felicity from China and Barrett from Albania. They were two of nine children. Their mother had specifically begun adopting children with dwarfism because her own son had dwarfism, and she wanted him to grow up with other little people around him. With their parents dead, Felicity and Barrett’s surviving siblings, the oldest of whom are adults, are now caring for one another.