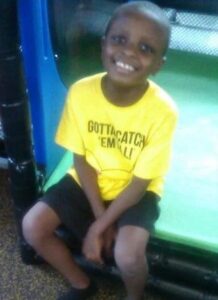 Details:
James was found dead at home, with his throat cut. His father, who police say was covered in blood and attempted to evade arrest, was charged with murder.

Neighbors often saw James running back and forth in the hallways and up and down the steps of their apartment complex.