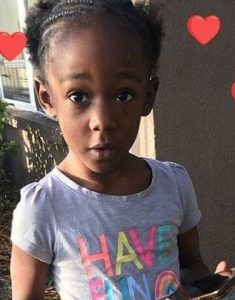 Details:
Je’Hyrah’s neighbors remember that her mother was often negligent. Je’Hyrah was allowed to walk barefoot near broken glass; she was often left alone at home, and strangers came and went from their apartment. A Child and Family Services case had been opened, but closed for lack of evidence of mistreatment.

Two days after the DCFS decided Je’Hyrah was safe, Je’Hyrah’s mother stole a car from a dealership and used it to drive them to the Hillsborough River. She picked up the little girl and walked into the water as Je’Hyrah struggled and screamed for help. When she reached deep water, she tossed Je’Hyrah into the river and walked away.

Je’Hyrah was found by divers less than a half-hour after bystanders called the police, but she had already drowned.