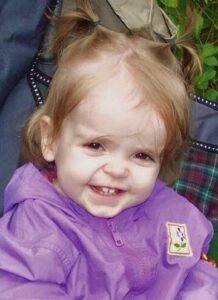 Details:
Because Jocelynn didn’t want to eat and threw food, her father allegedly slapped her, sending her head backward to collide with her high chair. She died of a head injury. At autopsy, she had injuries consistent with long-term abuse and shaken baby syndrome.

Her family remembers, “Any music would cause her to start singing, clapping and dancing, and would send everyone around her into fits of laughter and joy.”