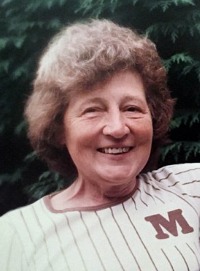 Details:
After refusing offers of help with caring for her, Margaret Meyer’s husband bludgeoned her to death with a bedside lamp.

She was a retired tax office worker who loved sports, including hockey, football, and cricket.

Source:
Pensioner who killed wife and stepped in front of train ‘let down by the system’
Man, 86, killed dementia-sufferer wife, 85, and stepped in front train
Family criticises social services over deaths of elderly couple
Man killed dementia sufferer wife, inquest hears
Husband killed wife to ‘put her out of her misery’, inquest hears
Dementia carer ‘smothered wife and tried to kill himself’
Devoted husband killed wife with a brass lamp
Husband killed Alzheimer’s sufferer wife and then attempted suicide
Mercy killing couple with Alzheimer’s should never have been allowed to look after each other, says son as he hits out at social services
Carer who killed wife with dementia had ‘fog of fatigue’
‘Dad killed our mum – but we’ve forgiven him’
Daughter of man who killed wife says she was ‘never angry’ with him
Dad killed our mum – but we’ve forgiven him because he was at breaking point as her carer