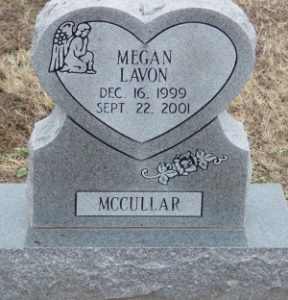 Details:
Megan had been removed from her parents’ custody and was living with a foster family she died of massive head trauma, allegedly caused when her high chair was deliberately slammed into a wall. Megan died of shaken baby syndrome, and her foster mother was charged with child abuse, but charges were dropped.

Her foster mother initially claimed that she had not killed Megan; but years later, diagnosed with late-stage cancer, she reportedly confessed to her husband that she had done exactly what they said she had done.

Case status:
Jessica Newhard (Foster mother), charged with second-degree murder. Charges dropped because the case was no longer viable 15 years later and the pathologist who had done the autopsy had died in the meantime.