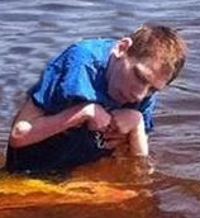 Details:
Michael died of starvation because his mother, though she was paid a government stipend to care for him, did not feed him. When he was found dead, his body weighed only 36 pounds.