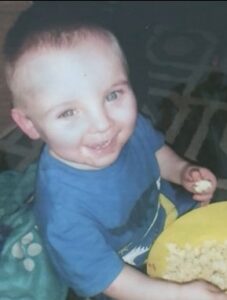 Details:
Noah’s mother initially reported him missing; but his body was found and his death determined to be murder. Noah had been abused for some time before dying from a head injury.

Sources:
Mom pleads guilty to murdering two-year-old son who has autism
The autopsy of 2-year-old Noah Tomlin was released: His mother is now charged with murder
Body believed to be missing Virginia 2-year-old found