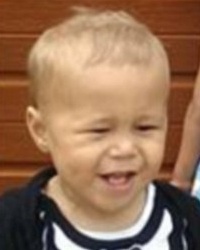 Details:
Andreas and his five-year-old sister Zaraiyah-Lily were both murdered by their father.

Source:
Yanchep father, 35, charged with double murder of his children
A 35-YEAR-OLD father has been charged with the alleged murders of his two children, a boy and a girl aged three and five, at their home in Perth.
The father who ‘stabbed his two young children to death’ in an attempted murder-suicide in Yanchep, Perth
everydayhero: HBF Run for a Reason 2015