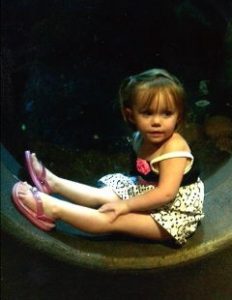 Details:
Bethannie was living with her aunt and her aunt’s girlfriend.

For two weeks, Bethannie’s aunt had kept her strapped to a high chair in the closet, claiming that she had to do this to keep Bethannie from hurting herself.

Bethannie was found unresponsive and dying of a massive head injury; she had been beaten to death by her aunt’s girlfriend. Her body showed signs of chronic child abuse.

Source:
Mesa County women sentenced in beating death of 3-year-old girl
Rebekah Joy Wallin on Why She Admitted Role in Child’s Death: “Because I’m Guilty”
Cops: Suspect kept child in closet
Woman Kept Niece Strapped To A High Chair And Locked In A Closet For Weeks
Woman, 29, ‘kept her niece in closet for two weeks before killing her’
Shanna Gossett: Aunt Kills 3-Year-Old Niece After Pushing Girl’s Head Into A Wall