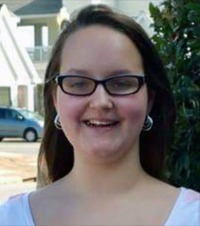 Details:
Grace and her twelve-year-old brother were both adopted into the same family. Her favorite colors were purple and light pink, and she loved flowers. She liked to help the special-needs students at her school.

When Grace disappeared, her mother said that she had stolen money and run away; then she did her best to stymie the police investigation and kept cashing Grace’s disability checks. Eventually, she brought out a forged letter she said was from Grace; the letter apologized for “being a burden”.

Grace’s body was found months later; she had been murdered. Grace had been beaten, poisoned, and raped by her mother’s boyfriend before finally being choked to death. Her body was dismembered and the parts scattered. Her mother watched and assisted in the killing.

Her mother said she had “behavioral problems” and an “emotional disorder” in order to portray Grace as an emotionally disturbed runaway, and she received disability payments to care for Grace as an adopted disabled child.