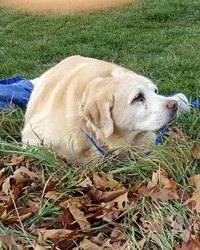 Details:
Gregory’s wife beat him and his dog Carley with a crowbar, believing that they were both old and ill and it was “time for them to pass on”.

Gregory died after some time in the hospital. Carley, 11 years old and severely injured, recovered and was adopted by a new owner, but died of old age early in 2016.

Gregory’s wife claimed she had killed her husband and beaten the dog to “end their suffering”.