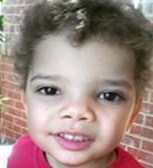 Details:
Mason liked jumping off the furniture. He watched Thomas the Tank Engine, The Lion King, and Cars, and he had a little brother named Wyatt.

Mason was beaten to death by his mother’s boyfriend.