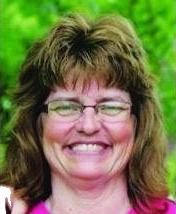 Details:
Peggy was shot to death by her teenage daughter. Her daughter and her friend then set the house on fire to hide the crime.

She was a faithful churchgoer and avid gardener.