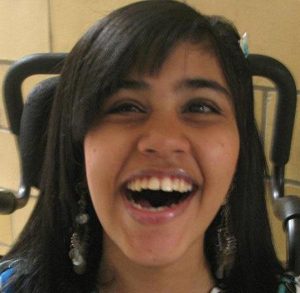 Details:
When she was about six years old, Qyzra’s parents immigrated to Canada from Tanzania, so that she could get good education and health care.

She was a bright student whose friends remember her smile fondly; she was always smiling. She liked fashion, pop culture, and boys.

She wrote an article in Girls’ Life about her experiences. You can read it here:
The Story Of A Girl With Cerebral Palsy

When their temporary visas expired and the government of Canada planned to deport them, Qyzra’s father shot her and her mother Shyroz in a murder-suicide.