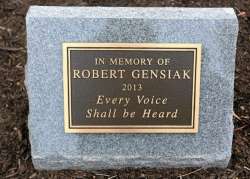 Details:
Robert was severely neglected by his family; he died of blood poisoning from an untreated skin rash his body could not fight because he was so malnourished.