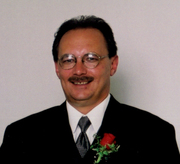 Details:
Ronald was shot by his son, who came to his care home and killed him there.

Before his disability he had worked as a manager at Home Hardware.