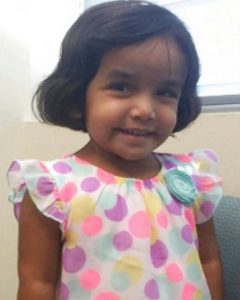 Details:
Sherin’s adoptive father claimed she had been adopted from India with developmental delays, malnutrition, and an “eating disorder”. When he brought her to the hospital with broken bones, he claimed that she had brittle bones from being malnourished at the orphanage.

Her adoptive father was trying to force her to drink milk at 3 a.m., and choked her to death doing it. He then dumped her body and pretended she had gone missing, before eventually confessing to the killing. The autopsy confirmed that Sherin’s cause of death was “homicidal violence”.

Later, the orphanage came forward and reported that Sherin had not had trouble eating. Her “eating disorder” may have been a fabrication to cover up her murder. She was merely small for her age, a condition called “failure to thrive” which is common in children with difficult backgrounds. The broken bones she had suffered months before her death had nothing to do with malnutrition and everything to do with child abuse.

Case status:
Wesley Mathews (Adoptive father), pleaded guilty to injury to a child by omission, sentenced to 30 years to life.