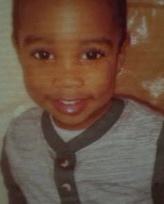 Details:
Tevaun was starved and beaten by his parents for some time before he died of blunt force trauma, dehydration, and malnutrition.