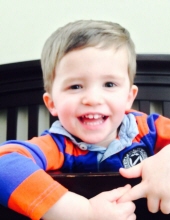 Details:
Tyler’s mother strangled him before setting her bedroom on fire and killing herself. Tyler’s twin brother, left alive in another room, survived the fire.