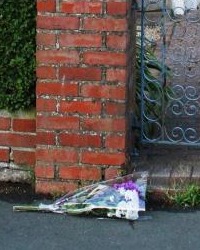 Details:
Jean’s husband killed her by bludgeoning her with a hammer, then strangling her, before taking his own life.