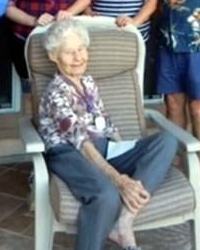 Details:
Vivian’s son took her home from the nursing home where she lived. He made her a cup of coffee, then shot her in the head.